Growing up as a kid, I had an obsession with guns, toys guns more likely. My father was a military man and even captain of an S.WA.T. team. I could even name most real life guns that I saw in movies. Yet, the distinction was guns in my life is that my father raised me correctly  in how to view them.

“Real guns are for self-protection”

“You should never point a gun at someone unless you truly have to”.

The point in which someone is informed about guns makes a big difference, for instance, many on the left believe that guns should be taken away from people.  Or that guns should be much more difficult to get access. This way fewer shootings would happen like that which happened in Orlando and various other shootings that have taken place in our world.

I’d like to clarify one simple fact: Guns, even though they can be scary and take the life of another human being are not the primary issue. The real issue at hand is the intentions of human beings that have access to them. There is a vast difference between the terrorist that shoots up a night club and an off-duty police officer or civilian who decides to pull out their firearm.

The terrorist’s heart is filled with evil of many kinds, his objective is to take life. While the officer or civilians objective is to save a life. Do you see the difference? Yes in events such as this lives are lost. But I’d much rather have someone deploy their sidearm in the name of saving others than from having no way of fending off a wolf.

I fully understand that some in our society may not like guns or have any desire to fire them or learn about them. That is their own opinion and mindset. Yet in  no way should that disqualify others from having a concealed carry weapon on their person, simply because guns are seen as “dangerous”. That is silly… After all, even though a person might not admit it. When danger strikes surely they will be thankful when a person with a weapon on them saves their lives.

Since the very first Jason Bourne came out, I’ve been a fan. Even Matt Damon, until this meme is posted: 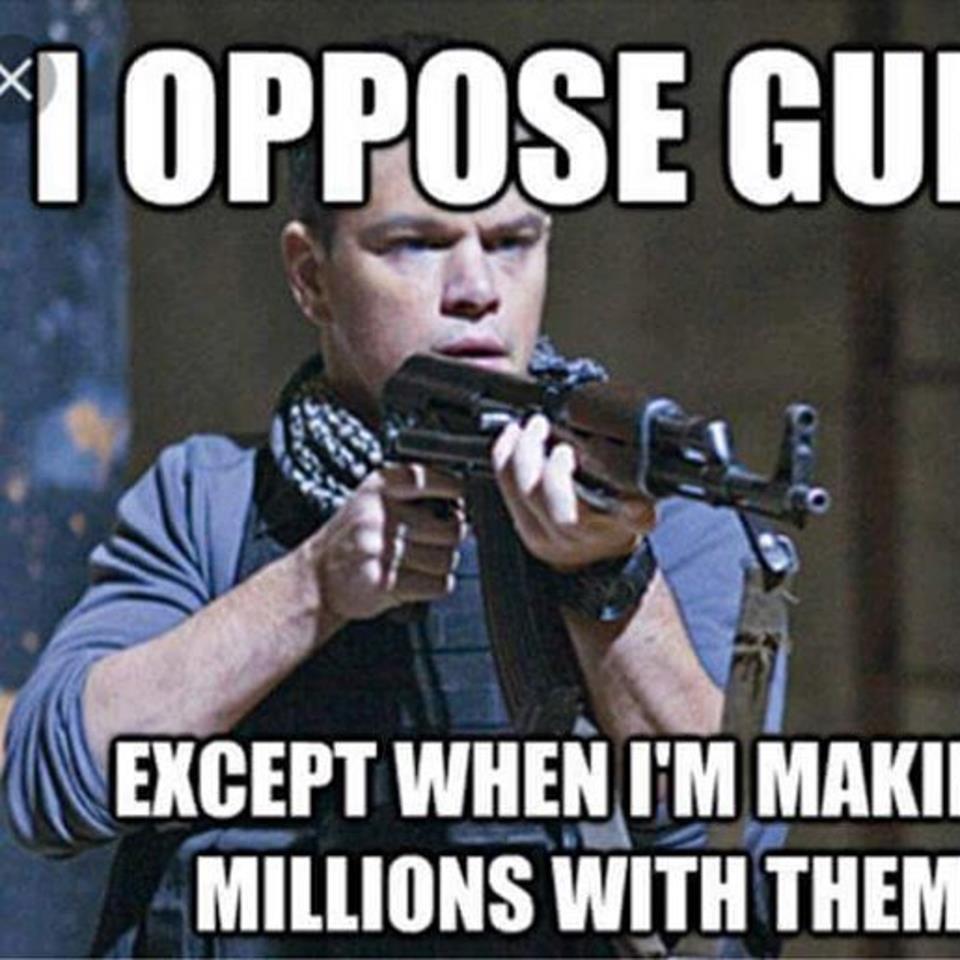 So even though the guy makes millions of dollars playing the role of Jason Bourne, he’s fine shooting weapons in movies. And yet he is not for them in real life? If he really did oppose them he probably should have turned down those million dollar roles. All I’m saying that one should honor their convictions to the best of their human ability.

All in all, my message is this. The more we educate ourselves on the subject of guns. The more I believe that a lot of the fears concerning guns will vanish. Take a firearms class, see how you like it. If you still are not for them in the end, that is fine. But do not hold to the understanding that guns are scary. I am more scared about the wickedness that lives in the human heart.

My name is Brandon Ryan, I am 36 years old and reside out of my Omaha, NE. I was born with cerebral palsy and have had the deck stacked against me since my very first breath. The very premise of my life has been overcoming obstacles and coming through great darkness. Doctors didn't I would amount to much, and teachers didn't think I was smart enough to graduate college. Now, I am a, college graduate (psychology major) published author, motivational speaker, certified fitness and nutrition coach and I also teach adaptive self-defense to people will a host of different abilities. I'm extremely passionate about helping those see, that they are stronger than you they know and that they can over come anything! View all posts by brandonryan1984

One thought on “My Thoughts on Guns and Gun Control”